Seattle is home to many piers, but Pier 57 near Waterfront Park comes with some of the better sights! For those who love seaside views and walking along boardwalks, like me, definitely come by here for this and more.
🐉Chinatown (Seattle) - When I was roaming the streets of downtown Seattle, this was one of those accidental discoveries that I'm glad I bumped into. I knew of this place, during my quick research before flying, but I didn't know just how close it was to the sporting stadiums and Pike Place market.
I'm coming home to Texas.
"It is our choices that show what we truly are, far more than our abilities."
Are you Team Jurassic Park or Team Jurassic World? 🦖
I agree with these paintings, Frida would definitely be a @spurs and @dallascowboys fan 👌🏼

Once class ends tonight, I will officially be done with graduate school.

It’s surreal to think how far along I have come since joining this program two years ago. I was unsure of where I was going that January 2015, and I had a few options. When I got accepted, I didn’t know what to expect. This was side-by-side with my weight loss journey that saw me go from around 235 lbs. (~106 kg) to 170 lbs. (~77 kg). Of course, the final weight didn’t happen until sometime mid-2016. A part of me wanted to keep going, but in an unhealthy way. It wasn’t until I saw the “6” in 168 that I looked in the mirror and said I needed to stop before I ended up way too skinny. Why am I telling you this? Because this was one of the many highs and lows of grad school and life; you will have your own triumphs and trials during your time in school.

As I said before in other grad posts: expect the unexpected. That certainly was true in my time. From making new friends, to losing new and old friends, getting back into the dating scene, surviving the rumors about oneself, crazy and amazing teachers, memorable outing adventures both good and bad, family despair and little triumph, and everything in between. But most of all, learning more about myself, because that is the one constant that we have. We never stop growing, and seeing the changes we make in ourselves. There were dark times during my time in grad school that hardly, if any, people knew about. I almost made poor decisions, and followed the footsteps of other family members who made similar mistakes. In the end, I always looked back to my past and how I survived and told myself (and continue to for as long as I live) that if I could make it through that, then I can make it through anything.

And here I am. Once again the future is uncertain, but I have options before me to think about. I don’t know what will become of the friends I made in school, for they have their own priorities. I honestly anticipate these coming months or so to once again go lone wolf, and do my own things while they are busy. But again, it is never how often one stays in touch with someone that defines friends but being there when one doesn’t expect it; that’s the beauty of it. Career will have an impact on travel as well, because unless I hitchhike and sleep on the streets, I can’t travel as often as I wish right after graduation. Unless someone gifts me enough money to do so, but I doubt that. But it will happen sooner than expected, it is just deciding where to is the question. I guess I did most of my reflecting a few weeks ago, for right now I’m basically just ready to be done with this chapter.

Softball league ended with another playoff loss at my work, but next January soccer will start which I am really excited about. An amazing concert this past Monday, and several more coming will make December (my birthday month) a fun one. Graduation is less than two weeks away, and the end of this chapter is nearly there. Tonight some classmates and I will get one last dinner together, which will be fun. Again, I have no idea where life will take me next but I’m looking forward to it; even if it’s on my own. I’m just going to look to the stars to guide me and my dreams. Whomever I meet next, hopefully will be positive people and fun adventures are had. In my time in the program, I was well-known, even if others didn’t personally know me, and many thought I was Mr. Socialite always going out to things. Partly true, but honestly I like the quiet life and this past year I began to do that more. A new group of students have started the program, and they will have their own adventures, gossip, and popular characters. Best of luck to them, and whoever reads this starting school of any level. Enjoy the ride for there will be nothing like it; and sometimes that can be a great thing haha. And so I leave the program, just like how I started: quietly walking into the next chapter of my life. . . 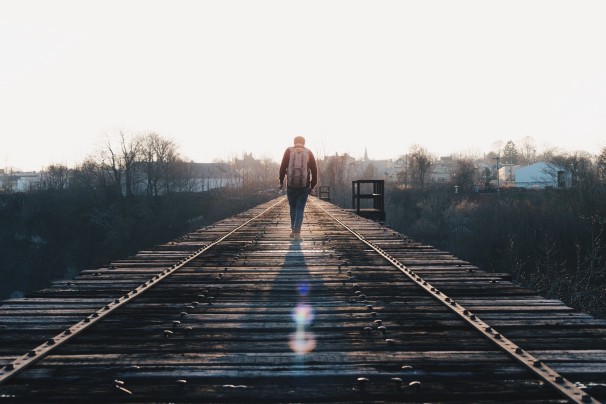